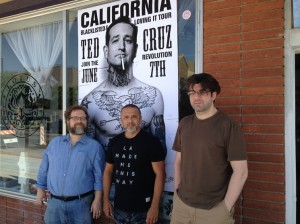 A ground-breaking exhibition of conservative artists featuring Remodern America’s, Richard Bledsoe, controversial right-wing street-artist SABO and National Review’s cover illustrator, Roman Genn. In the article, Richard explains his work as a Remodernist painter, “My art is political by not being political,” Bledsoe told New Times. “Because there’s such an inclination in the art scene to express a certain viewpoint to get accepted, whereas I look at art as more of a spiritual communication.”

THE DOUBLETHINK STRATEGY OF THE CULTURAL ELITISTS

Richard Bledsoe’s fiery commentary on Tracey Emin and corruption in the art world. “Once you realize the arrogant ruling class believes tearing down the traditions and standards of Western civilization will cement their grasp on unaccountable power, the promotion of Emin as the pinnacle of artistic achievement becomes understandable. Hyping soulless, unskilled art has a toxic, weakening effect on society as a whole. Conceptual art is a tool of oppression.” 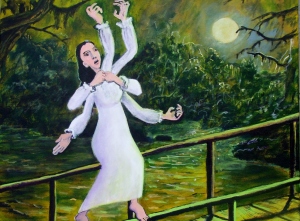 Art exhibition at the University of Kent in Canterbury, England featuring over 70 paintings by 42 Stuckist artists. This momentous show demonstrates the global reach of the art movement founded in 1999 by Charles Thomson and Billy Childish. Richard Bledsoe’s painting “The Portrait of Emmeline Grangerford” (pictured) was included among the powerful and amazing works on display at this International exhibit

SOMETHING IS HAPPENING IN THE ART WORLD, AND THE ESTABLISHMENT HATES IT

First part of Richard Bledsoe’s article on the connection between art and culture. “The contemporary art world cultivated by the self-anointed elite is largely a decoy, a misdirection away from real artistic concerns to a flashy simulation of art. What is offered is not art but artifice, an intellectual approximation of art which mimics its outer forms without participating in any of its true substance. Such falsity is poisoning our whole culture…” 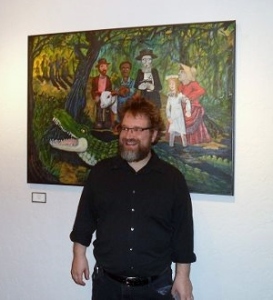 SOMETHING IS HAPPENING IN THE ART WORLD: ENTER THE STUCKISTS

Second part of Richard Bledsoe’s article on the connection between art and culture. “Stuckism, Remodernism, and other artistic movements like them are needed to address the massive dysfunction of the art world, and the oblique havoc it’s caused in our societies. People need to reengage with the arts, and make our moment of the great continuum of history less embarrassing. Positive improvements can happen, but it needs to starts in the art.”

“Local artist Michele Bledsoe always knew she wanted to create a children’s book. And this year, she finally did. With help from her husband, artist Richard Bledsoe, Michele created “The Secret Kingdom,” a children’s book based off her artwork that incorporates poems she and her husband wrote.”

“Art is for everybody. It’s the universal language that inspires humanity, but that’s not the type of thing that’s prevalent in the organized art world right now. The art world is undergoing a crisis of relevance. Hardly anyone who is not intimately involved in the art world itself is really paying attention to this stuff, and this is a huge loss for society.” Richard Bledsoe

ART DETOUR 25: A LOOK AT ARTISTS THAT HELPED TO SHAPE THE PHOENIX ART SCENE

Richard and Michele Bledsoe moved to Phoenix permanently in 2000 and 1998 respectively. In 2001, Richard took up residence in his first space on Roosevelt Row, before moving to Citywide Studios on 15th Avenue, serving on the board of Artlink and creating the Phoenix Remodernists Facebook group. Michele first showed her work at monOrchid in 2001, before connecting with Richard to hold studio space at Paper Heart from 2005 to 2007. After the Paper Heart’s closure, the pair co-ran Deus Ex Machina on Grand Avenue with fellow arts couple Jeff Falk and Annie Lopez, before closing the space in December of 2012.

Television may have started as happy nostalgia, but some think that it has taken a different turn. “The concern is of the very controlled and the manipulated information that we are presented by the media. They pick and choose what they show you and you can’t know for sure if what they are showing you is accurate or complete,” Bledsoe said. “All of these things were at play when I thought about making this show.”

The Postmodern War on America

This Plague Psychodrama is Peak Postmodernism. Its Retreat Will Lead to Remodern Renewal.

STUDIO: A New Painting in Progress, Part 5, Completion: In the Belly

Unexpected Gifts and the Art of Resurrecting Bees

Gerbils, Churches and the Art of Laughter

BLACKBERRIES AND THE ART OF LOSING YOUR MIND

SIX HANDS AND THE ART OF FOLLOWING YOUR BRUSH

PENCIL DRAWINGS AND THE ART OF PERSONAL MAIL (PART 2)

The Ghost and My Obsession Michele Bledsoe